Why It Takes Decades To Breed New Apple Varieties

The Cosmic Crisp, with its remarkable taste and long shelf life, is one of the latest apples to be ushered from seed to supermarket. 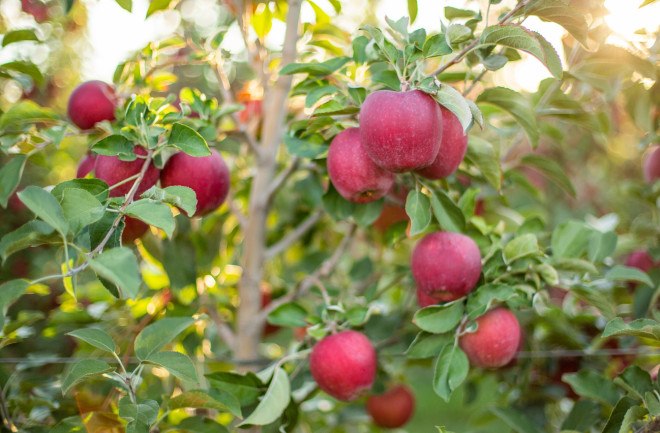 While there are already many apple varieties to tempt someone with, the Cosmic Crisp recently emerged as a truly irresistible example. A crossbreed of the Enterprise and Honeycrisp, the apple’s delicious texture and flavor is the result of 20 years of patient horticultural work.

In the state of Washington, where about 60 percent of the country’s apple supply is grown, researchers at Washington State University’s tree fruit breeding program worked to develop Cosmic Crisp for growers’ bank accounts and consumers’ taste buds.

“When you eat it, it’s not super tart, but the tartness and acidity kind of balance out the sweetness,” says Kate Evans, a WSU professor and pome fruit breeder based out of the university’s Wenatchee research and extension center.

So long as she and other breeders continue working on the sustainable production of higher quality apples, it’s safe to say other apple varieties will be popping up at your grocery store in the future. Here’s how they get there.

The Core of Creation

The process begins with sexual reproduction, when male and female flowers unite through pollination to make seeds. Pollen is usually carried from one flower to another by way of insect, bird or wind. But in the case of WSU’s apple breeding, the pollinators are human.

Before apple blossom petals fully open to expose a flower’s reproductive center, breeders extract a male flower’s pollen-filled anthers. They then dust that pollen onto a chosen female, removing its petals afterward to discourage insects from visiting with additional pollen types. Bags can even be put over flowers to ensure pollen purity, Evans explains.

Any resulting seeds are taken to greenhouses, where they germinate and sprout into seedlings. Each seed is genetically different, Evans says — not unlike genetic differences between siblings from the same human parents. When the seedlings are planted in orchards, they grow into fruit-producing trees that are carefully evaluated.

One of several Washington apple orchards selected for the first planting of the Cosmic Crisp in 2017. (Credit: Cosmic Crisp®)

The growing process is time-consuming, and it can take six to seven years before a young tree produces the number of apples needed for proper evaluation of a new variety. “We need to have bins’ worth of fruit … to enable us to really evaluate it sufficiently,” says Evans, who is one of four tasters in her program. They walk through orchards from early August to late October, studying and biting into any apple that looks appealing.

On a busy week, she and her coworkers may taste more than 100 apples in a single day. “Sometimes it can be a nice job, sometimes it can be a really horrible job,” she says with a laugh. “Most of the year, I don’t tend to eat very much apple product in any way, shape or form outside of work.”

Some apples are refrigerated for months on end before being tested — to see how well they hold up in storage. This is critical, as apples are made available year-round in the U.S. and must survive long transport to places they don’t naturally grow.

If an apple can’t survive long out of the orchard, it won’t be commercially viable, Evans says: “The consumer has to want to buy them and eat them and buy them again. Because that’s the only point on the chain in which money comes in.”

As seedlings grow, only some are considered good enough to move on to the next step: clonal propagation. This asexual reproduction method, responsible for many commercial nursery trees, makes exact copies of a tree by cutting the bud from one tree and manually inserting it into the rootstock of another. The resulting bud grows to become the main trunk of a new tree.

Over the years, evaluators take thousands of unique trees and select increasingly fewer ones, replicating them at different program sites. This leads to more trees of fewer varieties, but also an increase in the amount of fruit they produce, Evans says.

Eventually, Washington apple stakeholders visit the orchards of the best propagated trees and an advisory committee, which Evans oversees, provides input on the pros and cons of a given variety. In the end, however, it is she who makes the final decision on whether to release something to commercial growers.

Out of This World

For Cosmic Crisp, the entire process from original cross-combination to commercial release spanned two decades. Evans says this is a fairly standard timeline.

“We do, I would say, probably more evaluation than many other breeding programs for apples,” she says. “We were very aware that, when we released it, the probability was that we were going to have much more interest, and many more growers taking it up.”

That hunch turned out to be right, though Evans attributes the Cosmic Crisp’s success to its ideal eating experience: “It is super crisp, but it also has a level of firmness which I think enhances the crispness and makes it very juicy,” she says.

As for the story behind its name, the fruit’s official website states that the apple’s vivid lenticels (in other words, its pores) reminded taste testers of the cosmos.

How Truffles Took Root Around The World

We've Relied On These 5 Animals Throughout History

Before Pompeii, A Volcano Cloaked This Ancient Village In Volcanic Ash