The Octa-glove pairs suction cups with LIDAR sensors and allows glove-wearers to pick up and release objects without grasping. 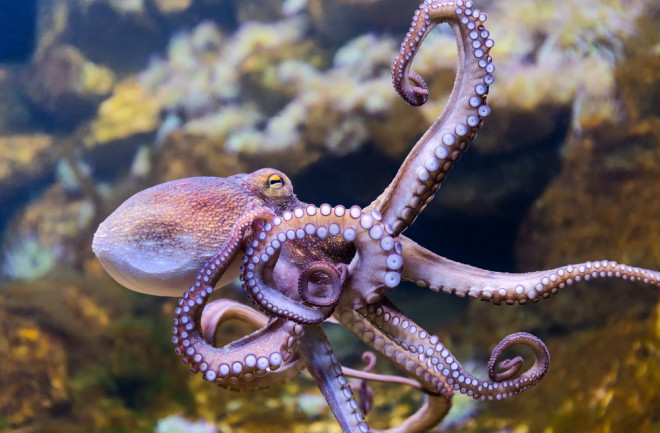 If you’ve ever held a fish, you know that people are terrible at grabbing wet, slippery surfaces. In fact, some scientists think that our fingers get pruney just to manipulate objects underwater.

In a new study, researchers invented a glove that mimics octopus suckers to improve our grip. The device’s suction activates automatically and can pick up objects of all shapes and sizes. It could help rescue divers grab victims, archaeologists retrieve artifacts and engineers improve underwater construction.

“It makes handling wet or underwater objects much easier and more natural,” says co-author Michael Bartlett of Virginia Tech in a press release.

The “Octa-glove” grips and releases on demand and produces adhesive pressures upwards of 60 kPa. It switches on and off within 50 milliseconds, making it faster and more adaptable than other manually controlled adhesive devices.

“The glove does the work to grasp. It can all be done without the user pressing a single button,” says Bartlett in a press release.

Tiny LIDAR sensors sense when an object is close and trigger suction. It’s similar to technology that some cars use to navigate obstacles and warn drivers of potential collisions. When an object is close enough, it pulls the cup upwards like a toilet plunger and engages the suction, creating negative pressure.

The sensor-suction system mimics the nervous-muscular control of an octopus, the researchers say. “By merging soft, responsive adhesive materials with embedded electronics, we can grasp objects without having to squeeze,” Bartlett says in a press release.

Just one sensor-suction unit is enough to lift small objects like toys and spoons. But octopuses can have over 2,000 suckers across all their arms. When all of them are engaged, it’s difficult to loosen their grip. Similarly, the Octa-glove can also deploy multiple suckers at once. With several suction cups, it can pick up larger objects like plates, boxes and bowls. It’s extremely adaptable to different surfaces: hard or soft, round or flat.

“These capabilities mimic the advanced manipulation, sensing, and control of cephalopods and provide a platform for synthetic underwater adhesive skins that can reliably manipulate diverse underwater objects,” co-author Ravi Tutika of Virginia Tech says in a press release.

The researchers say that this is just the start of octopus-inspired wearables. In the future, they could swap LIDAR sensors with chemical or mechanical ones to only grab specific types of objects. And it’s not limited to underwater applications. The device could be used in healthcare to help people with poor grip strength, for example, or in manufacturing to assemble wet objects. The researchers hope that 330 million years of evolution could provide solutions to today’s technological problems.

3 Historic Hoaxes That Duped The Masses, Scientists Or Media