Sperm Whales Have the Biggest Brains, but How Smart Are They?

Believe it or not, having a brain that weighs 20 pounds means there are a lot of qualities that humans share with these giant marine mammals. 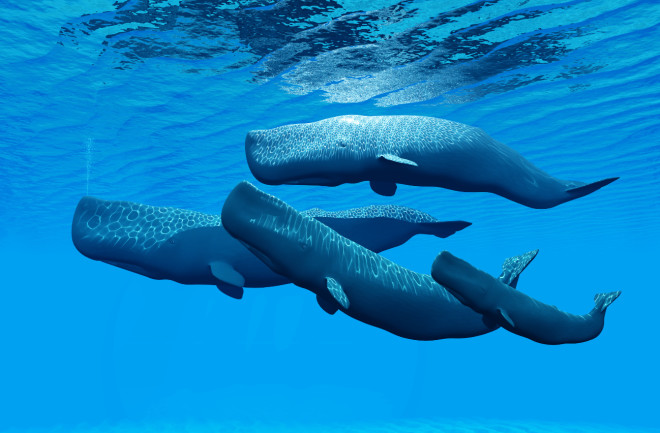 The sperm whale is an astonishing creature. It’s longer than a semi-truck, weighs more than 90,000 pounds and is the largest member of the toothed whale family. It’s known to dive 6,500 feet in search of prey, and to stay down there for longer than an hour at a time.

Perhaps most fantastically, the sperm whale’s brain weighs in at a whopping 20 pounds — the biggest of any species on Earth. To put it in perspective, that’s about five times the size of a human brain.

But when it comes to brains, is size all that matters? There’s a lot we don’t know about sperm whale intelligence because it’s difficult to carry out neurological testing on a marine mammal of this magnitude. But some clues point to sperm whales being much smarter than we give them credit for.

How Smart Are Sperm Whales?

A 2021 study published in Biology Letters, for example, looked back to 19th-century historical logbooks from whalers. Researchers found that sperm whales were at first easy to catch — but almost immediately, the whales learned how to evade hunters and whaling success plummeted by 60 percent. The study hypothesizes that the whales passed information to one another through echolocation to avoid being caught.

We also know that sperm whales are a cetacean species, along with dolphins and porpoises. And though we haven’t done as much research on the whale species, we have done a wide array of cognitive testing on dolphins.

As a result, researchers know that dolphins have a number of skills that are exclusive only to a very few intelligent species. They’re one of the few animals that can recognize themselves, for example. They’re also capable of complex problem-solving, like finding people lost at sea or pinpointing underwater landmines.

Though it’s true that brain size doesn’t necessarily translate into brain power. A 2014 study published in Brain, Behavior and Evolution found that while both sperm whales and killer whales have among the biggest brains of toothed whales, their brains are very different in their makeup.

“The larger cerebellum in the killer whale may be related to its more active vision and visuomotor skills, its wider range of sound production, and its hunting activities with more types of prey,” write the study’s authors.

Are Sperm Whales as Smart as Humans?

Animals that have big brains — including sperm whales, apes and humans — usually have a few things in common. They usually live long lives; for example, sperm whales can live for 70 years or longer. Additionally, they’re capable of complex behaviors and they tend to be more social. Whales may work together to hunt or communicate in a language all their own.

What’s more, humans, whales and dolphins all have spindle neurons in their brains. These nerve cells make us capable of deeper thought, such as reasoning skills, memory, communication and adaptive thinking. And like humans, whales have emotional intelligence — meaning they’re capable of empathy, grief and sadness. Still, in proportion to our body size, the human brain is bigger than that of the sperm whale.

Yet there’s still so much we don’t know about how smart sperm whales really are. While humans might be better at complex tasks, for example, the visual and auditory portions of our brains may still lag behind. And just like the whalers of a century ago, we’ve likely been underestimating marine mammals large and small for as long as we’ve known of their existence.

What Happens When Scientists Put a Human Intelligence Gene Into a Monkey?