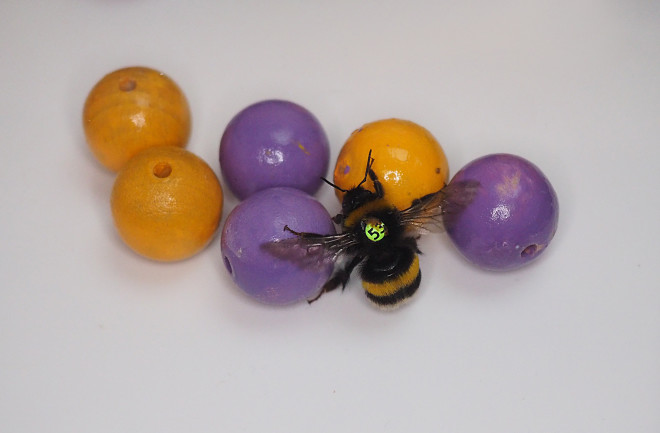 Mammals do it. Birds do it. And now scientists say bees do it, too. According to a new paper published in Animal Behaviour, bumble bees like to play. The paper provides the first formal observation of playing behavior in insects, as well as the first evidence for the existence of positive emotional states in bumble bees, and potentially other bugs, too.

"It is certainly mind-blowing, at times amusing, to watch bumble bees show something like play," says Samadi Galpayage, a study author and student at Queen Mary University of London, according to a press release. "It goes to show, once more, that despite their little size and tiny brains, they are more than small robotic beings. They may actually experience some kind of positive emotional states, even if rudimentary."

The Buzz About Play Behavior

Scientists have observed an assortment of animals interacting with objects as a form of play. In mammals and birds in particular, this behavior is thought to aid the development and maintenance of an animal's mental and motor skills, as well as an animal's overall welfare.

That said, scientists tend to struggle with investigating the play behavior of animals outside of the mammalian and avian classes. The ability of other animals — such as insects — to manipulate objects for fun has only occasionally been subject to systematic study.

Looking into the science of insect play, a team of specialists set up several tests involving bumble bees and wooden balls. Throughout these tests, the scientists observed as the bees repeatedly rolled the balls despite the absence of any practical purpose or function associated with the activity.

According to the team, this behavior complied with the core scientific criteria of play. (In fact, specialists typically describe play as inherently impractical and differing in form from functional behaviors, such as foraging. They also tend to present play as voluntary, repeated and rewarding, occurring only when animals are in a relaxed state.)

Because play behaviors are seen among scientists as pretty solid indicators of an animal's ability to feel positive feelings such as pleasure, the team states that their new bumble bee observations could challenge prevailing notions about what insects can and cannot experience.

"This sort of finding has implications to our understanding of sentience and welfare of insects and will, hopefully, encourage us to respect and protect life on Earth," Galpayage says in a press release.

Ultimately, to test whether bumble bees participate in play, the team watched as 45 bees found their way through an arena with two distinct pathways to a feeding area stocked with a solution of sucrose.

The first path was direct and unobstructed, while the second was winding and blocked by an abundance of small wooden balls. According to the scientists, all 45 bumble bees departed from the direct pathway at one point or another during testing and transitioned to the indirect path. There, each bee tapped and turned the balls between 1 and 117 times — a striking rate of repetition that indicates that the insects found the activity rewarding despite the absence of a clear reason for doing it in the first place.

Afterwards, the scientists observed as the bees went through an additional test. This time, the insects were exposed to two colored chambers, one without objects and one with wooden balls. After their initial exposure to the chambers, the bumble bees were then prompted to enter one of two similarly colored chambers, whereupon they showed a consistent preference for the color of the chamber that they previously associated with the balls, and therefore the ability to play.

According to the team, these two tests removed any possibility that the bumble bees interacted with the balls for a practical purpose, such as finding food or shelter. The team also observed that some bees were more playful than others. In fact, younger bees played more frequently than older bees, and males played for longer periods than females. The first of these patterns mirrors a broader behavioral trend among younger animals. And the second may reflect the fact that the different responsibilities of male and female bees within a colony provided the males more opportunities for play.

"We are producing ever-increasing amounts of evidence backing up the need to do all we can to protect insects that are a million miles from the mindless, unfeeling creatures they are traditionally believed to be," says Lars Chittka, another study author and a professor at Queen Mary University of London, according to a press release. "This research provides a strong indication that insect minds are far more sophisticated than we might imagine."

Surprise: Turtles and Nearly All Vertebrates With Lungs Make Sound

More From Discover
Technology
Text-To-Image AI: Powerful, Easy-To-Use Technology For Making Art – And Fakes
Planet Earth
What Coffee Means to 6 Different Countries
Mind
Nostalgia and Thinking About the Future Can Be Good For You
Health
Could COVID-19 Be Changing Who We Are?
The Sciences
Was Nefertiti Egypt’s Leading Lady Before King Tut?
Planet Earth
Where is the Lost City of Atlantis — and Does it Even Exist?
Recommendations From Our Store
My Science ShopDiscover STEM Kits
My Science ShopDiscover 2022 Calendar
My Science ShopStrange Science
My Science ShopElements Flashcards
Shop Now
Stay Curious
Join
Our List